What to Wear to a Latin Mass | Attire & Dress Code Guide 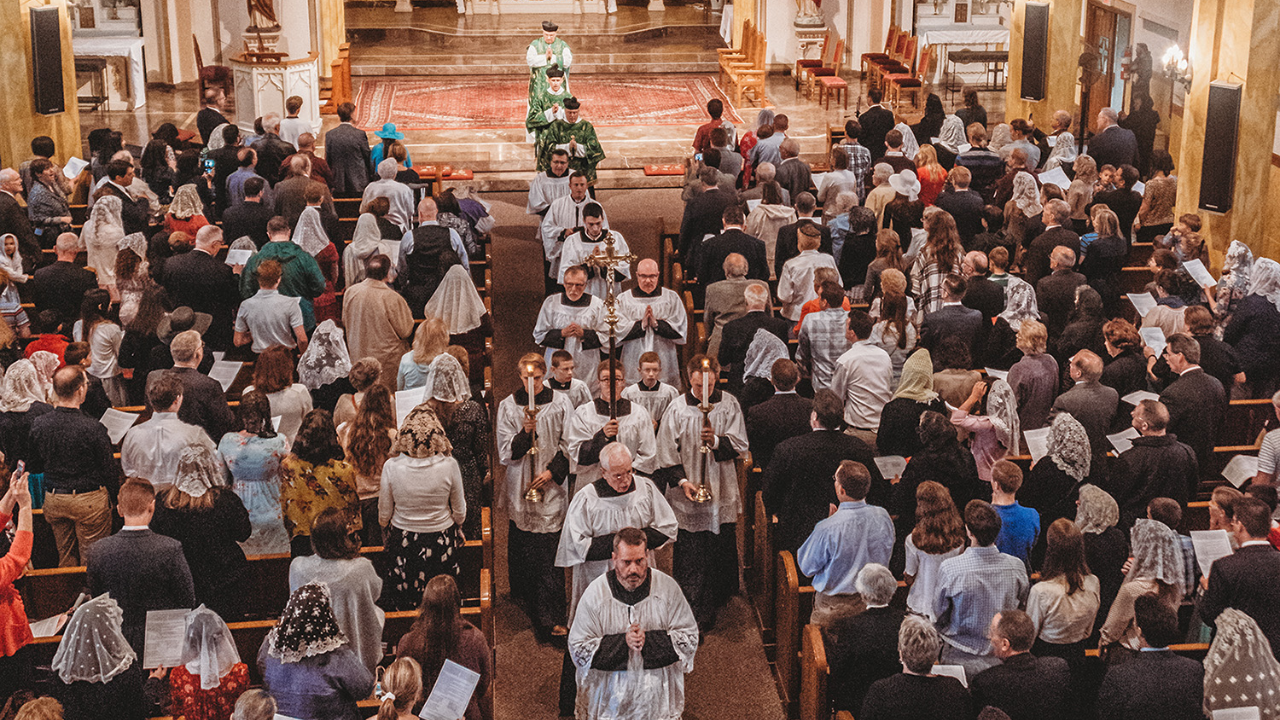 If you’re new to the Latin Mass, you might have some questions about how to dress – and that’s okay! The Latin Mass is growing, but it is by no means “the norm”, so any unfamiliarity is understandable. In fact, questions related to proper attire and dress code at the Traditional Mass are among the most common, so you are not alone!

If you plan on attending a Latin Mass and find yourself wondering “What should I wear?”, “Is there a strict dress code?”, “Must women wear veils?”, or even “Will I be judged by others if I don’t dress a certain way?”, you’re in the right place. Keep reading to learn everything you need to know about dressing for a Traditional Latin Mass, and why it’s so important.

To be clear, although modesty is always important, there is no universal dress code for attending a Latin Mass. You won’t be barred from entering church or from participating in the Mass unless, perhaps, you dress with the explicit intention of distracting and disturbing others. There are, however, certain expectations that traditionally-minded parishes have for how their attendees should dress.

The short answer? You are expected to dress with dignity and modesty.

This means wearing attire that shows respect for yourself, the people around you, and most importantly, God. More about what that means later, and why it’s so important, but let’s first take a look at the specific recommendations for both men and women.

Since God made women the more beautiful of the two sexes (as women are the pinnacle of His creation in the book of Genesis), there is generally more focus on modesty when it comes to women’s dress.

Because there is more pressure on how women dress, it can often lead to scrupulosity – pulling up a low-cut shirt or pulling down a short skirt. Focusing on what others think can take away from your focus on the Mass. Just try your best to dress respectfully and modestly, and don’t worry – you will eventually figure out the minutia. If you’re unsure whether or not a certain outfit is modest, it’s always best to err on the side of caution.

There is generally less focus on modesty for men, however, there is more focus on avoiding casual attire. There’s nothing necessarily wrong with wearing a Polo shirt or forgoing a suit jacket (especially in warmer weather), but it’s highly recommended that men dress using their “Sunday best”. The list below contains recommendations on the ideal attire for men.

What’s with the high standards?

“Do you not know that your body is a temple of the Holy Spirit within you, which you have from God?”

If you’ve never dressed up like this, you might ask yourself “What’s the big deal?” or even “Why are these crazy trads so obsessed with modesty?”.

Although not as commonly adhered to today as in previous centuries, these standards are not arbitrary practices invented by prudish traditional Catholics. Modest standards of dress have existed for centuries – and they stem from scripture and the Church.

Why every Mass is worth dressing up for

Whether you’re attending a Latin High Mass, Low Mass, or even a Novus Ordo Mass – there is always one element in common: Our Lord is truly present. Catholics should always strive to dress in a way that reflects the reality of God’s presence at Holy Mass.

Below is an excellent short video about the reason Catholics should dress up for Mass, which applies to the Latin Mass.

FAQ about dressing for a Latin Mass

Can women wear pants to the Latin Mass?

Don’t worry – it is unlikely that you will find the “pants-police” at a Latin Mass. However, it is preferred that women wear modest and feminine outfits such as dresses and skirts.

Do women have to wear a veil to the Latin Mass?

Technically, no, although it is strongly encouraged at most parishes. Some parishes have veils available to borrow in the vestibule. The majority of women veil, but it’s not uncommon to see women without head coverings.

Is there a dress code for Latin Mass weddings?

Like any wedding, you’ll want to choose something lovely to wear! However, Latin Mass mass weddings might be more formal than what you’re used to. Some things you’ll to be wary of are short skirts, low-cut tops, and sheer material. Ideally, skirts and dresses would flow effortlessly past your knees. For more details, simply follow the same guidelines from above.